About 8 months ago I was having a blast with the family, celebrating Sinterklaas. For those who don’t know, it’s an old Dutch celebration, closely related to Christmas. You celebrate Sinterklaas by getting together with the entire family and then unwrapping gifts and munching away for one night. This is probably where everything went from being fun, to a rollercoaster of health issues.

It so happened that my niece was sick with a fever. She was coughing quite severely, but this night was mostly about her so no way she wasn’t going to be there. The next few days, everyone gradually got sick with a fever. Most of us got really sick. Think 5 days in bed.

After a few days I went back to work, not thinking too much of it. It happens, and I’d continued working while I was sick so I wasn’t behind too much. Still, I was still pretty tired and not feeling that great, but work must go on. One week later, I was back in bed with a mild fever. This continued for nearly 2 months. I would get better, and get sick with a fever again, but it just seemed viral in nature and I figured I was just a bit stressed and having a hard time shaking it.

Then, we went to Portugal on a sprs.me trip. Awesome idea. You don’t know where you’re going just until you actually get on the airplane. Adventurous and fun!

Surprise me in Portugal

Once we landed, we found this great place to eat seafood. I wasn’t feeling too hungry, and my stomach was hurting.  We then randomly sat next to some people working in the same building as where I work in Amsterdam. Small world! Obviously this meant we had to go out and drink and party with them. I wasn’t feeling too great, but continued anyway.

The next day, I was a wreck. My body was in pain. I had a serious pain radiating from my stomach. But it was my girlfriend’s birthday, so I toughened up, and continued. I made it through the night – not being the best boyfriend ever – but still got through it.

That’s when things took a turn. I wasn’t able to get out of bed anymore. Everything was heavy. I was feeling horrible. My whole body felt like I had a fever, everything hurt, and most importantly, I couldn’t eat anymore. The next two days were torture. On the plane back I was in so much pain, but fortunately we found 3 seats allowing me to sweat it out and lay down through the fever. Once landed, I made an appointment with the GP. The GP thought it was probably viral – “but you should probably get a blood test just to be sure.”

With all the strength left in my body, I walked to the medical center to get my blood taken. Then I made it back home, struggling every step of the way, with pure willpower and determination getting me there. Once home, I went to bed.

Until I got a call from the hospital.

DR: “Umm… So I just got these blood results. Are you already being treated by a doctor?”
ME: “Um, what? No?”
DR: “Oh. Umm, is it alright if I call your GP to discuss what to do?”
ME: “Sure… What is it though?”
DR: “It’s complicated, we found some values in your blood that don’t look good. I’ll try calling your GP now”
——-beep, beep, beep——-
Okay, that wasn’t too good. What on earth did she mean?? Am I going to die? Okay, don’t panic, it’s going to be fine.
—–RINGGGG—–
DR: “I can’t reach your GP. Are you able to go to the hospital? You need to go there now. Bring sleeping things, you’re being admitted to the hospital”

Once I got there, still nobody was telling me anything. They didn’t know exactly what to do with me. I was sent from nurse to doctor to nurse. Blood was being taken. Alertness and reflex tests were being done. They got me an X-ray of my chest and an echo of my stomach. Then a doctor informed what it was that had gotten them worried.

See, there are three types of blood cells: 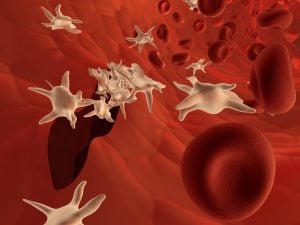 Apparently I had almost no blood platelets in my blood. You’re supposed to have between 200k and 400k platelets per liter of blood. I had 6k. Which was dangerous. How dangerous? “You could have a brain hemorrhage, intestinal hemorrhage, or have any type of trauma injury, and we wouldn’t be able to prevent the blood from stopping and you’d most likely die”

Blood platelets are the cells that do the heavy lifting when it comes to blood clotting. That scab you get when you get a cut – that’s blood platelets. And I had none. Now, that little cut you get is fine because it’s on the skin and pressure can be applied. What’s really scary is the fact that in our veins and arteries there are regularly tiny little ruptures and bleeds that would normally get resolved by your body.

The doctors didn’t treat me straight away. I wasn’t a typical case. Apparently they had to rule out all of the causes first to see how to treat me. After a little while, they figured it out – it was the cytomegalovirus that I probably got from my niece 2 months earlier that was causing the problem.

Now that they knew what was going on, the treatment could start. So they gave me nearly 4 liters of immunoglobulin (priced at €2k/500ml, so that was €16k of medication just to start. Thank god for Dutch health insurance!).  After a few days of this, along with a slew of other medication, multiple blood tests every day and my body in complete and utter disarray, they decided to let me go home. My girlfriend had been worried sick and was incredibly happy to see me come home.

This lasted a few days, and I had to come to the hospital 3x per week to get my blood checked. After one week, they dropped again, even lower than they were before, and I had to be re-admitted. This time they gave me dexamethasone. It worked. But temporarily.

Now, the head doctor and I had gotten in direct contact. No more junior doctors in between. We started to discuss options, procedures, and whatnot. It became increasingly high chance that this wasn’t going away. I crashed and cried. She informed me I had to be extremely careful as my values were swinging between 1k and 3k.

I had the option between getting my spleen removed, or trying out other medication. We decided to go for Revolade, the next option. That was about €100/pill, one pill per day. I picked up the medication, and along with it came a booklet of 5(!) pages of side-effects. Hair-loss? Check. Liver problems? Check. Basically everything that’s bad? Check. But I was willing to take it and I took it religiously.

No effect. Zero. My platelets flatlined to 1k consistently. I got frustrated with my doctor. The lack of clarity of confidence was showing. Rare diseases are tough if you’re a general internist. I then asked to be transferred to another hospital, and I moved to the VUmc in Amsterdam – to the Cancer Clinic.

There we continued the Revolade. Still no effect…

TIA – Thanks in advance? Not really

2 weeks in, I’m having dinner with my girlfriend. I’m feeling weak, but I’ve cooked dinner and ambitiously I think of suggesting a tomato omelet for tomorrow. But instead of that, I suggest an elephant. And other random words.

Crap, that’s not good. I can’t find my words. I become quiet, as I only want to say the words that make sense. It takes 10+ seconds to find the right words. My girlfriend has no idea what it might be. I know exactly what it might be.

About 20 minutes later I tell her and we call the hospital. They suspect I may have had a transient ischemic attack or a TIA.  That’s when the circus starts. MRI – X-Ray – Blood tests – Echo – Hartrate monitors – everything the hospital has.

Fortunately it wasn’t a stroke and I was able to recover back to normal within no time. Still, I was pretty traumatized by the experience and aware, more than ever, of the seriousness of what was happening.

Stress in a pill

After the TIA, my new doctor decided that it was time to throw in the big guns. With any autoimmune disease, doctors love to throw this little pill at it called Prednisone.

Prednisone is a synthetic corticosteroid drug. The drug is a form of the naturally occuring hormone called cortisol. Cortisol is generally considered to be the ‘stress hormone’. When administered as prednisone, this has the effect of reducing your immune system’s response. Generally, doctors will give you at most 20mg per day (which is also the largest pill which is sold). In my case, the doctor prescribed me 80mg per day, so I would take 4 pills of 20mg every morning.

In the beginning, this was amazing. I hadn’t left my bed for ages because I had developed hematomas in my legs, and walking or standing would only make them worse. My body didn’t have any clotting capabilities so it also wasn’t healing at normal speeds. With Prednisone, suddenly my body got a massive jolt of energy. It was basically like taking long-lasting speed every morning.

My platelet count also jumped up to 22k. That was the highest it had been up until that point, and many of my issues started to heal within days. The hematoma stopped hurting and I was able to walk again, but it came at a high price. It became impossible to focus, and impulsiveness began to rule my life. Making major decisions became difficult and I needed a second opinion from those around me regularly, because I stopped trusting my own judgments.

After 2 weeks, the platelet increase stopped and it went back down, and then we had to stop taking prednisone. The withdrawal was horrible. My platelets dropped so much I could hardly do anything, and my adrenal functions had also dropped so I basically couldn’t get out of bed again.

Prednisone? Not so much fun. Would not recommend it at 80mg per day.

Okay, so… What happened?

After this, my doctors recommended I take another type of medication, called N-Plate. N-Plate has been a lifesaver. Literally. Nobody really expected the N-Plate to work; it is almost the same as Revolade so it didn’t seem likely.

N-Plate increases the amount of platelets produced by the body. It does this at a rate that exceeds the rate at which the body can break down these platelets.

After about 2 weeks, my platelets were up. And they stayed up. It’s amazing, the bleeding stopped and I am no longer reliant on heavy medication to simply do basic things like going to the supermarket.

However, my fatigue continues. It’s unpredictable, but at least I’m no longer in danger.

Every day I now see as a new opportunity on life. Every day spent relaxing and recovering is a day I cherish, but every day spent productively is a day I realize I didn’t have before. I realize that if this treatment stops working I may have a much lower quality of life and that means I need to enjoy and maximize every damn day as long as I can.

In that spirit, I’m back to helping startups and working with companies like Unless.com

Update: Since writing this article, I’ve recovered from ITP and am no longer reliant on medication, am not I a high risk case anymore and I no longer suffer from fatigue.