Bubble poppin’ – The bubbles of our time

You’re starting to read it in more places – the bubble is going to pop. But which bubble(s) are we talking about? Previously people experienced real estate bubbles, banking bubbles, even tulip bubbles, but nowadays there are so many bubbles forming that it’s almost hard to keep track of them.

What is forming our bubbles?

The consistent low interest rates being provided by central banks are resulting in an intense influx of capital. Central banks are doing this to prevent economic growth from stagnating; and from the top level numbers this seems to be working. At the same time, I would estimate (or rather guess) that maybe as much as 10% of this capital is going into bubbles.

A bubble starts to exist when people invest in ‘stories’ rather than financial facts. Usually investors look at financial metrics in a company and then make a calculated decision on what the company is going to be worth. ‘Story stocks’ is a financial term of stock overvalued because of a story behind it. A stock with a hypothetical valuation based on a future promise. IF this company nails X they will be worth 1 trillion USD. Investors usually stay away from these stocks as they are a high risk investment, but inexperienced investors will see the meteoric rise of such a stock and invest in them ‘because it’s rising rapidly’. This is a common phenomenon, and is also what allows the world to grow further. The problem comes when entire industries start to pop up, because investors no longer run significant risks with their capital. And that’s where we are now.

What are the bubbles?

It’s almost insane how much people have invested in 3D Printing. There are startups valued at billions with cashflows of merely tens of millions and negative profit margins. All of this comes from the initial promise of 3D Printing – enable anyone in the world to create custom items from their own home. The dream of everyone having a 3D printer installed in their living room. A star-trek like vision where you order a computer to make you a coffee and it magically appears.

The reality though, is that most 3D Printing is an inferior prototyping method, resulting in brittle products, often with a short lifetime, and with limited usability. Most products that can be manufactured can be made to be suitable for 95% of the population. For the 5% of the population there are ‘custom shops’ that fill the void.

The dream that was sold, does not match what it is becoming, and it’s resulted in another bubble. 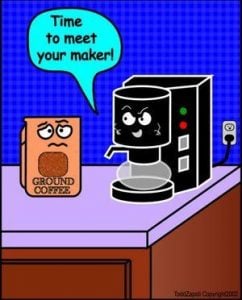 It’s a nice concept, and to some extent it’s all true. As the cost of transistors continues to go down according to Moore’s law, more things will be connected. But the dream of coffee cups talking to coffeemakers isn’t likely to happen. Instead, the number of machines that are already connected to the internet as they are right now will continue to grow as they become more affordable to the masses, and we’ll simply see ‘more of the same’.

It’s another bubble, based on a story that was spread, resulting in money being put into talking coffee makers, but those aren’t going to materialize any time soon and the actual benefit for end customers is going to be far more limited than is promised right now, and on a much longer timeframe than we are expecting.

AI and Deep Learning. This is a topic where I both get extremely enthusiastic and extremely sad. It’s a topic where there is a lot of potential (including for example the creation of Autonomous vehicles!) But the promises being made are so big that it’s just going to come short, no matter what.

The problem with nearly every single one of the major AI and Deep Learning initiatives is simple. The data isn’t good enough, and we’re completely unable to actually extrapolate the things from the data that people think we will be able to. It’s a hard limit to what’s possible with AI, but at the same time that hard limit is almost always ignored by investors. I’ve seen so many startups pitch “big data” and AI, only to realize that there is no such thing in their space and that everything turns out to be a manual process.

It’s one of the scarier ones, because the over-promising puts the actual potential of this market at risk.

Now, here is a bubble that I can kind of get behind. Again, there is an overpromising of the technology. Autonomous vehicles aren’t an easy challenge. You want to be able to get to a 99.99% reliability before people are willing to give over control of their car. That’s an almost unattainable challenge, when it takes decades to get to even 95% reliability, and even when it passes that point, you’ll be looking at a security challenge which is insane. Autonomous vehicles will go the same growth trajectory as voice recognition – it’s already at an amazing level but it took decades to get to this point and it’s an asymptotic curve to get to the accuracy we’re really looking for.

I would say, Autonomous vehicles are going to be a thing in 2035 – another 20 years from now – but investors have been promised real-life explosive usage within the next 2-3 years. Twenty years is a big gap to bridge, and a lot is going to change in that time period. If capital becomes more expensive, this is one of the things that’s likely to get a huge cut.

What I do believe is a hype, is the associated ‘Blockchain technology’ – the hypothetical valuation of the technology that came with cryptocurrency. There’s a lot of money being poured into these technologies because hypothetically they will change the way we do business and the way we transact money. However, that simply isn’t true. Blockchain isn’t more efficient than our current currency system, it’s mostly just different. Nevertheless, it’s already being valued as a complete replacement of the current system, making it another bubble that’s likely to pop.

Okay… nice bubbles, but are they really going to pop?

Eventually – they will. It’s just that bubbles don’t always pop with a bang. Often times it’s more like a football with a hole in it. It takes a while for it to empty out, it loses shape as it does and eventually an ugly, unusable ball remains.

I do believe that, when central banks finally raise interest rates, capital is going to become a lot more expensive and many of the current startups looking at the next ‘billion dollar valuation are simply going to go bust astonishingly fast.

Regardless of what’s going to happen – the 2020’s are going to be an interesting decade.